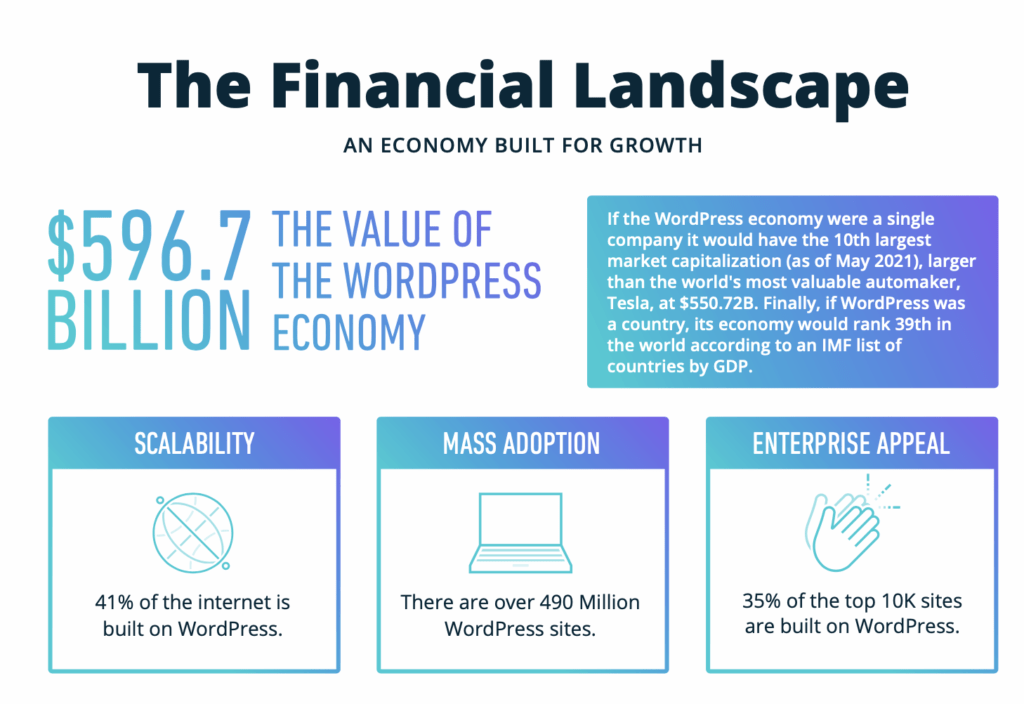 The study, commissioned by our strategic partner WP Engine and carried out in the U.S., UK and Australia by Dr. Chris Brauer, Director of Innovation in the Institute of Management Studies (IMS) at Goldsmiths University of London and Vanson Bourne, assesses the economic value and the social impact of WordPress.

Current economic value of the WordPress ecosystem was estimated at $596.7 billion

The study showed that the current economic value of the WordPress ecosystem was estimated at $596.7 billion, with the number expected to rise to $636 billion by the end of 2021.

To give some context to the number, if the WordPress economy were a single company it would have the 10th largest market capitalisation (as of May 2021) – that’s larger than the biggest automaker Tesla!

If WordPress were a country, it would rank 39th in the world according to an IMF of countries by GDP.

The power of WordPress

Although WordPress was founded less than 20 years ago in 2003, since then it has grown rapidly to become the most widely used CMS in the world, and still remains the fastest growing.

WordPress is used by 41% of websites today

WordPress is used by around 41% of websites today. That’s around 491,172,767 sites including the White House, The New York Times, TechCrunch and many others, with 35% of the top 10k sites running on WordPress.

The fast rise to the top is likely due to the flexibility and scalability of WordPress, supported by the incredible ecosystem of open source developers, constantly creating and updating ever growing possibilities of WordPress through themes and plugins.

93digital, London’s leading enterprise WordPress agency are proud to have contributed to the study representing the “agency” side of a cross section of over 100 various, dynamic aspects of the WordPress ecosystem including other WordPress agencies, as well as hosts, and plugin and theme providers.

To read the complete “The Economic Value of WordPress” study, please visit https://wpengine.com/wordpress-economy/, where you can learn more about the results.